Akron Radon Reduction Systems is a Licensed Radon Mitigation Contractor, meaning that we have the knowledge and experience required by the Ohio Department of Health to install mitigation systems within the state.  Aside from taking 40 hours of formal training and passing two nation exams, our technicians must keep detailed records that can be audited at any time by the state.  The testing equipment we use to measure radon levels must be calibrated by the manufacturer on an annual basis, in order to remain compliant with state law.

Now that you know what it means, you’re probably wondering how it’s done!  Although there are several techniques used in a variety of situations, the most common is called Sub-slab Depressurization (SSD).  This is the technique Akron Radon specializes in, and what we’ll be covering in this article.  First though, you should understand how radon enters the home.

Every home is built upon soil, gravel, and rock.  The floor of the lowest level of your home is in contact with soil below, unless there is a crawlspace.  Crawlspace mitigation techniques are a bit different, and will be covered in another article. For the purposes of this explanation, we’ll assume you have a concrete floor.  If your home has a basement, the walls are also in complete contact with the surrounding soils.  This soil naturally gives-off radon, which is a very heavy, odorless, colorless gas.  As the air-pockets in the soil are filled by other shifting soils, or water from rain/snow, this gas is forced into your home through the smallest of cracks in and around your foundation.  Sometimes the cracks are large and easy to see, while other times they are minute and barely visible.  If you’ve had an interior french drain installed for weatherproofing, that’s the easiest place for radon to enter.  Because of its heavy weight, radon will become most concentrated on the lowest level of your home (often a basement). 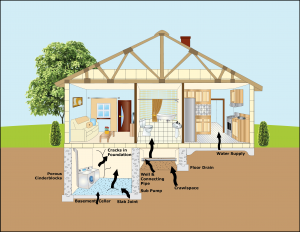 So, now we know how the radon gets in and where it can be found in the home. But, how do we get rid of (or mitigate) it?  Using SSD of course!

Every home is different – construction techniques, materials, layout and aesthetic preferences of the homeowner all affect system design.  Akron Radon’s technicians will design the most effective and efficient system possible while considering these variables.  Some clients prefer the cheapest solution, which is almost always an exterior system.  Others are more concerned with the “look” of the system, and prefer the slightly more costly interior systems.  We wrote a great article  that examines both interior and exterior radon mitigation systems.

In almost every home, we will drill at least one 4″ hole in your concrete slab or wall to reach the adjacent soil.  Sometimes, more than one suction point is needed.  If you have a sump pump & crock, we may use a modified lid to convert your crock into an access point (called a suction point).  Depending on the number of access points needed (determined by the size and layout of your home), more than one system/fan may be installed to effectively depressurize the surrounding soils.  Remember – “depressurizing” the soil simply means that we’re sucking radon-gas-containing-air from the soil and blowing it outside. 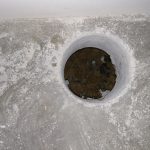 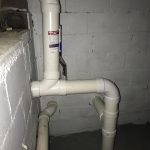 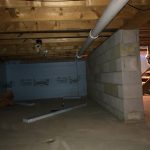 Next, our technicians will route a solid 4″ PVC pipe from the newly drilled hole to the exterior of your home. By law, the radon fan may not be installed in the living area of your home. So, if you chose an “exterior system”, we’ll route the pipes outside to the fan, which creates suction.  From there, the pipe will extend above your roof-line where the radon is expelled.  If you chose an “interior system”, we will route the pipes to an unfinished attic space, where your suction fan will be permanently mounted.  From there, we will penetrate the roof of the home with another PVC pipe. From the outside, the only visible part of an interior radon reduction system is a 12-18″ pipe going through the roof (just like the plumbing vent stacks that are already there). 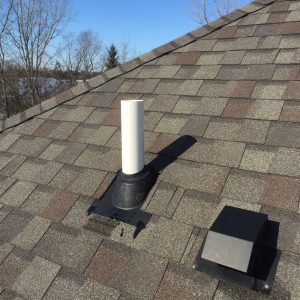 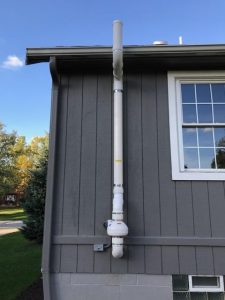 Once the access points are drilled, pipes are routed, and fans are installed, the last step of the installation is the electrical connection.  During the home evaluation and system design phase, our technicians will have determined what modifications must be made to tie into your electrical system.  Whether the fan is in an attic or outside, we will install an electrical box and switch for servicing the fan.  In most circumstances, the tie-in is very simple.  Since the fans don’t draw much power at all, we will have several choices in most homes. Again, this will be discussed with the homeowner prior to beginning installation.

That’s it!  Once we are finished with the installation, we’ll show you how to determine if the system is working properly (a simple manometer will be visible from inside the home) and go over your warranty information.