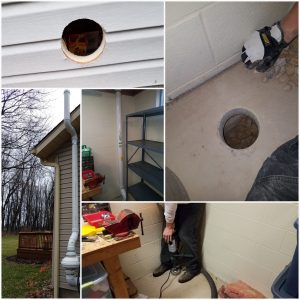 Last month, we got a call from a concerned homeowner living in the Akron/Coventry area.  She used a homeowner’s radon digital test machine and was getting readings over 30 pCi/L (that’s VERY high!).  She wanted to confirm the readings and if accurate, remedy the problem.  We scheduled an appointment just a few days later and left our Sun Nuclear Continuous Radon Monitor for 48 hours.

When we returned to view the results, the numbers amazed us…the radon levels peaked at over 50 pCi/L!!! Thats about 13x the upper-end of the ‘acceptable’ range according to the EPA.  Naturally, the homeowner was very concerned and even remorseful that she hadn’t remedied the problem in the 30 years she owned the home.  We did our best to reassure her that we’d get it taken care of and that she was actually ‘ahead of the curve’ ; most homeowners don’t ever test for radon until they’re selling.

We did a thorough inspection of the home to determine why the levels were so high, but everything looked ‘right’.  It was a very well-built home with no slab/wall/foundation cracks and was obviously well-maintained.  Upon removing the sump cover, however, we discovered the problem.  The home was built with an exterior drain-tile system that tied into the interior sump-pit. This means that the dirt/air/gravel surrounding the exterior home was in direct connection with the air inside the basment via the drain-tile (pipe) connecting the two systems.  While this is an excellent technique for keeping water out of the home (her basement was bone dry), it’s a nightmare for radon mitigation.  When we try to create negative pressure below the slab by sucking air out, we’re usually sucking air from a relatively air-tight ‘envelope’ created by the bottom of the slab, foundation walls/footers, and the un-touched earth beneath the gravel. In a home like this though, our fan would be pulling air from outside the home as well because it was connected by perforated pipe (aka drain tile).  As such, we had to install a much bigger fan than normal.

Upon installing her system, we were able to drop the level to below .5 pCi/L which is AMAZING!  Check out some of the progress pics below: 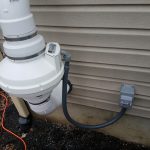 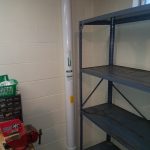 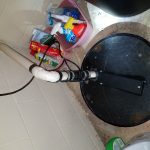 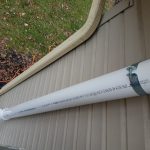 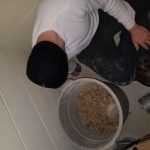 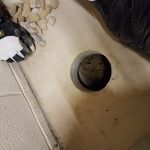 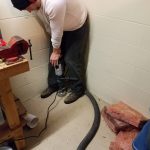 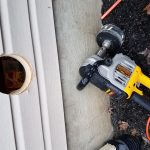 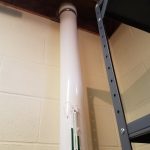