Skip to content
Home » Blog » Did You Know? » Did you know that testing processes vary between real-estate transactions and testing for the general public?

We recently had the pleasure of attending a 16 hour class and certification program sponsored by the University of Minnesota and NRPP-AARST.  A primary focus point of this continuing education class was the difference between radon testing protocols for real estate transactions vs. testing for the general public (aka a self-motivated home-dweller).  As a result, the EPA provides the public with two guides : “EPA Citizens Guide” and “ EPA Home Buyer and Sellers Guide“.  While the general principles of radon measurement and mitigation are similar throughout each document, there are several distinct differences.  The EPA recognizes that real estate transactions are almost always on a timeline, and has incorporated these needs for buyers/sellers into their suggested measurement/testing protocols.  We’ll explore a few of these below:

First, the test location (level) depends on the purpose of the test. The EPAs recommendations are different for the general public compared to a real estate transaction. We will use the same 2000sf home with a 1000sf finished basement for all of our hypothetical examples. 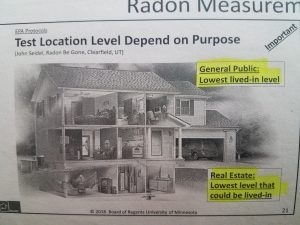 Secondly, the type and number of recommended tests vary depending on whether the testing is required for a real estate transaction, or is requested by a concerned homeowner.

As you can see, the EPA prescribes two entirely different protocols depending on the purpose of the test.  It is the responsibility of the licensed tester to comply with these measurement protocols, as well as the associated documentation of such. For example, testers in Ohio are required to calibrate continuous monitors annually, cross-check their units with a known and recently calibrated unit once every six months, and log other procedural processess regularly.  Testers using the passive devices must purchase and analyze blanks (testing devices never exposed to radon) and spikes (devices exposed to known levels of radon) regularly, perform at least 10% of their tests using duplicates, and keep the results in a control chart to ensure Quality Assurance.