Skip to content
Home » Blog » Did You Know? » Why is the pipe open at the top? Won’t rain get in?

One of the most common questions we get is “Why isn’t there a cap or elbow on the pipe outside? Won’t rain get in?” Everybody wonders the same thing, and it makes perfect sense!  The answer though, is not so straight-forward.  The MAIN reason we don’t put a cap or elbow on the pipe to prevent rainwater from entering your mitigation system is simple: the State of Ohio forbids it!  But why would they forbid a simple cap?  In general, anything that is added to the opening increases resistance to airflow and has a chance of clogging up (debris, rodents, ice, snow etc).  To play it safe, the only thing the Department of Health allows us to place on the top of the pipe is a rodent screen (a 1/2″+ wire mesh – no smaller).

The second reason, which many people are surprised by, is that it really doesn’t matter!  Over the course of a year in Ohio, it is estimated that 7 gallons of rainwater will enter the PVC standpipe that terminates above your roof. However, over 1400 gallons of condensation will be formed (and subsequently drain back down the pipe) in that same period of time!  Over 200x more water will enter your radon mitigation system from condensation, than rain.

All of our fittings and equipment are rated for use in wet conditions. This includes (of course) the pipe, fan, electrical connectors, electrical box & electrical switch.  The fans are designed in such a way to allow the water to pass through the fan blades and eventually back into the gravel/dirt beneath your basement floor. Condensation, on the other hand, is formed as a result of the moist air being pulled from below your slab reacting with much warmer (or cooler) air outside of the PVC pipe.  Water droplets form inside the pipe and gravity takes care of the rest.  Many do not think about the fact that there are thousands of gallons of water in the soil beneath and around your home…so we let the water drain right back where it came from!

In summary, we can’t cap your pipe because of Ohio law.  However, the reason you think you’d want to cap the pipe isn’t a great reason, after all (because of condensation). 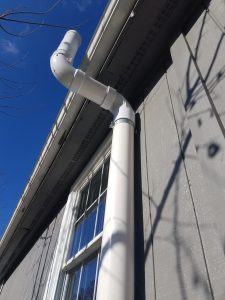